Considerations for Adding FIDO U2F to Your Security Protocol

Millions of email and social networking logins and passwords become public almost every month. You don’t have to be an IT guru to realize that a password, no matter how complicated, is no longer an adequate security tool.

The way users choose services is changing, adding more strains on security protocols. Before, users chose the most convenient option. Today, they go for the most secure one.

To heighten security, multifactor authentication (MFA) and its simplified version, two-factor authentication (2FA), became an IT staple. The first line of defense is your login and password, which the user knows and remembers. The second is something that only this particular user has access to: an SMS or email message, one-time password (OTP / TOTP / HOTP) applications, cryptographic tokens, biometric data, etc. The cheapest and most convenient methods are applications and SMS messages. All you do is enter the username and password through the website, receive the secret code in an SMS on your phone, enter the code and enjoy access to the data.

The World of 2FA Today

A lot of time passed since the advent of 2FA, and the majority of Internet services use it today. 2FA has conquered the financial tech sector: it’s practically impossible to imagine online payments without confirmation and authorization via SMS message, for instance.

However, oddly enough, despite the widespread dissemination of 2FA, users still get their accounts hijacked and compromised. This article will discuss some of the shortcomings and vulnerabilities of 2FA methods.

Phishing.Practically all 2FA solutions are vulnerable to man in the middle (MITM) attacks, and therefore to phishing.

Security. Let’s look at SMS verification, the most popular 2FA solution on the modern market. You can read a million stories online about SIM cards being reissued in Russia, USA, South Africa, the UK and other countries. In addition, hackers have their hands on tech that is no longer exclusively available to special services. Hackers also love to rely on good old social engineering tricks. As can be seen, security issues are plentiful and not easy to fix.

Costs. Cryptographic tokens, proven to be reliable in terms of security, are rather expensive. As a rule, the end user pays that high price. Only rare service companies cover the costs and delivery of such solutions to the user. Moreover, even sending SMS messages costs money. Because of all these costs, not everyone can afford the implementation and maintenance of 2FA methods.

Compatibility. Not all operating systems incorporate drivers for cryptographic tokens, and not all users have the desire to find and install them.

Ease of use. Some users are too complacent to enter one-time passwords. Unlocking your phone screen, opening the message or OTP program, reading the secret code, entering it, making a mistake, repeating the process all over again – this is the standard interaction between the user and two-factor authentication.

To conclude, today’s 2FA solutions do not offer reliable user protection, are often cumbersome to use, are too expensive and generally are not suitable for universal implementation.

In 2007, PayPal tried to introduce 2FA with the help of OTP via SMS. Despite the fact that, at the time, this method was progressive and quite safe, the implementation pace was disastrously low. Most users simply ignored the option to increase their data security.

Exploring the possibilities for biometric technology implementation, PayPal, together with Validity Sensors, first voiced the idea that it was time to create an industry standard to support all hardware authentication methods. The FIDO (Fast IDentity Online) Alliance was launched in 2013 with the goal of creating such a standard. Many large companies such as Google, ARM, Bank of America, Master Card, Visa, Microsoft, Samsung, LG, Dell and RSA became members.

At the moment, FIDO pursues the goal of creating easy-to-use, secure, private and standardized solutions.

Besides other achievements, the main result of FIDO’s work to standardize 2FA so far is the Universal Second Factor (U2F) protocol.

U2F is an open, driverless protocol originally developed by Google and Yubico to be used for two-factor authentication with special USB, NFC and Bluetooth LE devices as well as with SIM-cards (specifications are still in development) that store keys and independently perform cryptographic operations.

Currently U2F support is implemented in Chrome and Edge browsers, as well as OS Windows 10.

The protocol is based on a challenge-response authentication using digital signatures.

From the user’s point of view, working with the protocol is rather mundane. The user enters a username and password and uses a USB (Bluetooth/NFC) U2F device (pushes a button on it, enters a PIN, passes the biometric verification or does nothing), and authentication is a success.

Interaction of the U2F client such as a web browser or Windows 10 is demonstrated below: 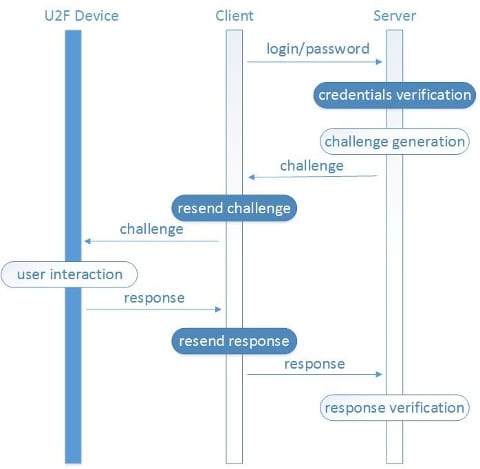 Let’s look at the work of the protocol in more detail.

The user enters a username and password. The server checks the credentials, and if they are correct, generates a random challenge and sends it to the client software, which, in turn, passes it to the U2F device. The U2F device waits for the user to take action for confirming further operations (as discussed above, pushing a button on the device), and then returns the signed challenge to the client software, which is passed on to the server to verify the signature.

To protect users against phishing, the client software adds the origin URL and TLS channel ID to the challenge before sending to the U2F device, while the server, after getting the signature, verifies the data received.

Signing everything with the same pair of keys will lead to a variety of negative results, from one account of a service getting compromised to all accounts using the U2F device compromised. In order to avoid this, during registration, together with the challenge, the server sends an application ID and random seed, based on which the U2F device generates a unique pair of Registering Dependent Keys. The method of generation is not described in the protocol and is fully at the discretion of the device manufacturer.

Due to the fact that the pair of keys is unique to each registration attempt, it is possible to use one device for multiple U2F accounts.

In order to avoid insecure implementations, each U2F device has a built-in certificate that guarantees specific hardware implementation of the device and is certified by the FIDO Alliance.

In a situation when the user is away from devices, malicious software may try to attack them. To avoid such scenarios, the U2F standard requires that all singing challenge operations are activated by the user (i.e., the user must confirm the decision to choose two-factor authentication). As mentioned above, this may be a simple push of a button, entering a PIN code, entering a fingerprint or using another unique identifier.

U2F is a well-designed, strong, open and standardized technology. It is implemented by such giants as Google, GitHub, Dropbox, and official British government websites.

It is important to remember that U2F, like any other two-factor authentication technology, must be used precisely as a secondary factor to the user’s login and password credentials.

To use a U2F token as a secondary factor when working with services supporting U2F authentication on a Linux machine, you have to meet only a few conditions.

Install a libu2f-host package, which contains udev-rules for the correct identification of a U2F token.

It should be clarified that the data of the udev rule applies only to tokens from Yubico. If your token is from another manufacturer, this file may be useful to you.

If you are an owner of the Blue FIDO U2F key, you also have to create a file called /etc/udev/rules.d/50-security-key.rules and add the following to it:

After completing these actions, perform the following command:

You can check if udev is working correctly with this command:

For further work with services supporting U2F you will need Google Chrome, version 38 or higher.

To enable 2FA when you log in on a Linux machine, you will need to install a few extra packages:

To set up U2F you need to configure the file containing a list of your tokens, using the pamu2fcfg utility:

Add the following at the end of file /etc/pam.d/common-auth:

Note that the cue option directs you to a reminder console, urging you to press the button on the token. For more information about the pam_u2f module options, read this.

After the reboot and entering the login and password, your system will ask you to press a button on the token with the help of a message and the blinking of the key. Both sudo and su will work in the same way.

The sufficient option in the line above doesn’t require the presence of a U2F key.

If everything works smoothly, it can be substituted by required.

Technically, with the help of manipulating PAM module configuration, you can also implement passwordless use, for example, su. After entering this command, you only need to click on the token button to confirm the action. But it is worth noting once again that you should use 2FA only for its intended purpose, namely as a secondary authentication factor.

Finally, the following are must-have conditions: the setup of full-disk encryption, setup of a BIOS password, and banning system boot from removable devices. Otherwise, 2FA will not prevent unauthorized data access if the attacker has physical access to the machine.