Email has long been described as the “killer app” that attracted masses to the Internet starting in the mid-90’s. By one estimate, as of May 2009 some 247 billion emails are sent per day. Despite its massive and widespread use, the vast majority of these emails are relatively insecure.

A conventional email message is vulnerable to several kinds of compromise. For example, because message senders can be easily forged, you cannot be sure that the sender is who they claim to be; or that the message text has not been tampered with. Plus, email text itself is not generally encrypted, meaning that if someone hacks access to your inbox, they can view your messages.

In fact, it is possible to secure email against both of these vulnerabilities. There are several technologies available, but the one we’re going to look at today is called S/MIME and support for it is already built into most desktop email clients, including Outlook, Apple Mail, and Thunderbird.

The S/MIME standard is based on public-key cryptography. In this specification, an individual user owns a digital certificate which contains a public key and a private key. The private key is held only by its owner; the public key is shared with contacts. With the keys in place, you can use your email client to attach a digital signature to outgoing emails, or to encrypt the content of an email, or both.

When a user receives an email with a digital signature, a mail client that supports S/MIME will display an icon showing that the message has been signed. Often you can click this icon for more information, which usually boils down to verification that the message has not been altered. In truth, the digital signature ensures that the message was sent by someone with that sender’s digital certificate installed. Presumably this is the person you think it is, although technically it could be someone who had access to that sender’s computer, or stole his or her digital certificate.

The Apple Mail message composer includes icons for S/MIME encryption and signing if you have a digital certificate installed.

With a few simple steps, you can begin signing and encrypting emails yourself. Remember that to send encrypted messages, you will need your recipient’s public key, and for he or she to view them, he or she will need to be using a client with his or her private key–we’ll talk about how that happens below.

Step 1: Get your digital certificate

The first thing you need is a digital certificate that contains your keys. The easiest and most preferred method for obtaining a certificate is through a CA, or Certification Authority. You can get one for free from several vendors, although they will come with varying lengths of expiration periods. Typically, you can buy from same vendors a longer lasting certificate for a modest fee.

For this example, we will obtain a free digital certificate from Comodo, which is good for one year. To do so, visit the Comodo Free E-mail Certificate site. Once there, click through on the free certificate. You will be asked to fill out a form with a few basic details, such as your email address and name. Be sure to enter the same email address that you will be using in your email client!

Comodo will send you an email containing a link to your certificate. When you open this link, your browser will automatically install the certificate. Precisely where the certificate winds up installed depends on your software:

Firefox: The digital certificate will be installed in Firefox’s own key cache. You can access this cache via Tools/Options/Advanced/View Certificates/Your Certificates.

Internet Explorer: The certificates can be accessed through the Windows Control Panel/Internet Options/Content/Certificates/Personal.

Internet Explorer users navigate to the certificate as described above, then select the certificate and click “Export.” In the Certificate Export Wizard, select “Yes export the primary key” and then choose the PKCS 12 format. 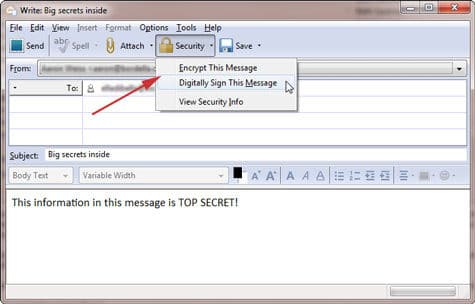 Now that your email client can access your digital certificate, you can send an email with a digital signature. We’ve already talked about one reason to do so—to certify that you are the message sender. But there’s another reason, too—to provide your certificate to a recipient.

When your email client detects your digital certificate is installed, the window for composing a new message will typically include a menu item or icon for applying your digital signature. See the included screenshots (above and below) for examples from the three major email clients.

Remember that, unlike a digital signature alone, you can only send an encrypted email to a recipient whose public key you already have received. Otherwise your email client will display a warning that the message cannot be encrypted. You can receive the recipient’s public key by asking them to first send you an email that they have digitally signed. S/MIME encryption and signing buttons in the Options menu of Outlook 2010.

Using S/MIME encryption is not without its drawbacks. For one, the major webmail clients, including Gmail and Hotmail do not have built-in support for sending or receiving messages with S/MIME security features. One workaround is to use a browser add-on, such as Gmail S/MIME for Firefox. Another is to configure your webmail service, such as Gmail, to deliver mail by POP or IMAP and use a desktop client with S/MIME support. (Not all webmail services offer this option.)

On the other hand, these “limitations” of S/MIME security may actually be seen as desirable depending on why and how you use secure mail.

Cybersecurity podcasts are an easy way to immerse yourself in the world of SecOps. Depending on your interests, you can catch up on the...
Read more

NFT-mania, pronounced nifty, is upon us with little time to prepare. From news of a collage selling for almost $70 million at Christie's auction...
Read more