Is Your Free AV a System Hog?

The effectiveness of malware detection, how well it catches infections, is the chief characteristic to consider when choosing an antivirus program. But resource consumption, how much system resources it uses, is also important. This is especially true on older machines where heavy duty usage by your AV software can bog down the system and make it crawl when running scans.

In a previous article, A Guide to Free Antivirus Software, I reviewed four different free antivirus programs from Avast, Comodo, AVG, and Microsoft. I looked at the security features of each. Now, I am reviewing the resource consumption of the same four programs.

Here I discuss the system requirements, download sizes, and the installation process. I also share the average physical memory (RAM) and processor (CPU) usage I saw while testing. Lastly, I discuss any performance settings that can help control the resource consumption.

The install file is fairly large at 56.2MB, but no additional downloads are required. The installation took only about three minutes, included an initial quick scan, and didn’t even require a reboot. After the install, it quickly updated the virus definitions.

Here are the memory usage numbers I saw for the two running avast processes:

In the settings I found a couple resource control features. In the scanning settings, you can choose a scan priority: High (default), Normal, or Low. The higher the priority, the more system resources it will use. I also found avast uses a caching feature to help speed up real-time and manual scans. It does this by not rescanning files previously marked as safe until a reboot or a virus definition update. 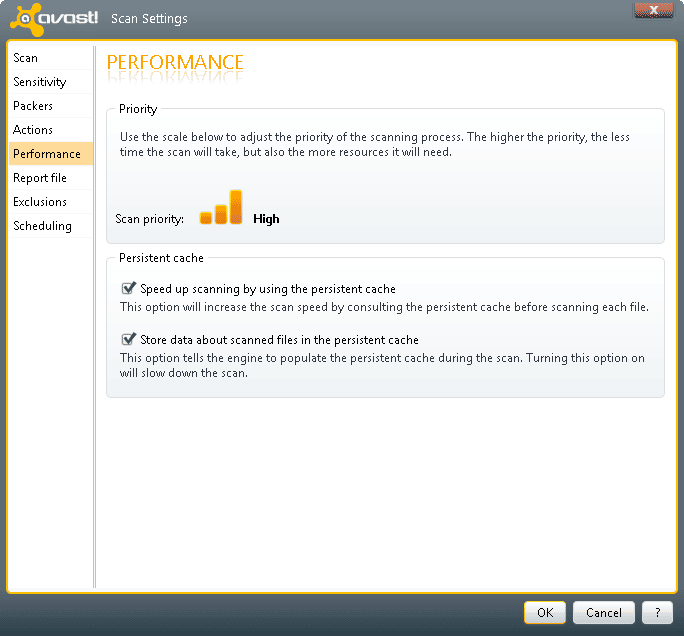 I also found two useful scan scheduling settings for laptops: you can enable it to not start if running on batteries and pause if you begin to use batteries. 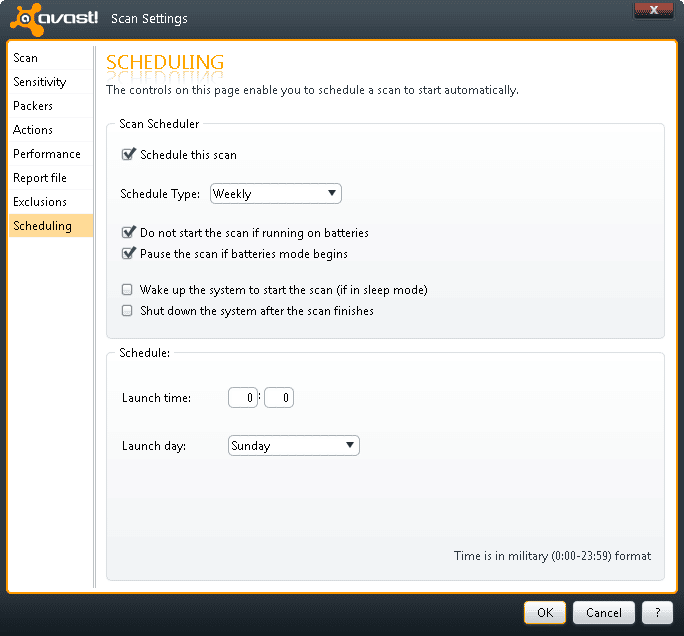 The download file at 59.7MB was the biggest of those I reviewed, but I didn’t have to do any further downloading during the install. Like avast, the installation only took about three minutes and didn’t require a reboot. But it did require a 10 minute update process, including a 142MB download.

Here is memory usage numbers I saw for the four running processes:

While idle these add up to 49,892K of memory usage. They recommend a full scan after install, but they also offer a critical areas scan, which is what I ran. During the six minutes it took to scan 201,909 items, the memory usage was very sporadic but averaged around 91,916K and 5 percent to70 percent CPU usage.

Keep in mind, the bottom two processes in the list above are for the optional GeekBuddy service COMODO provides. This is included in the install by default but you can easily opt out of it during the installation. If you do, you’ll see a reduction in resource consumption. For instance, I saw memory usage around 19,496K at idle and 61,520K while scanning.

Unlike with the other programs, I didn’t find any settings in CIS to limit CPU or resource usage.

The initial download file was a meager 3.71MB, but an additional 53.7MB was downloaded during the install. After the eight minute installation, a reboot wasn’t required. But it took another two minutes to analyze and update, including a 65.8MB virus definition update.

I was surprised to see 10 processes for AVG:

In the scanning settings I found you can adjust how quickly each scan type completes. The faster it scans, the more system resources it uses. You can specify the speed (low, medium, and high) or it can automatically adjust itself depending upon available resources. Microsoft Security Essentials – Lastly, I reviewed Microsoft Security Essentials (MSE) version 2.1. It supports Windows XP SP3 with a 500 MHz or higher processor and 256 MB of RAM. It supports Windows Vista SP1 or SP2 and Windows 7 with a 1.0 GHz or higher processor and 1 GB of RAM. For all versions, it requires 200 MB of free disk space.

The download file was a small 7.69MB with a quick 25 second download. The installation only took about three minutes, but then required a reboot. Though the virus definition update itself was small and quick, it took a few minutes for it to automatically update and activate the real-time protection.

At idle, the three processes were using about 76,344K of memory. During the quick scan, it only increased to 80,780K and the CPU usage ranged 15 percent to 25 percent, which took about 10 minutes and scanned 7600 items.

In the settings you can set the max CPU usage during scans from 10 percent to 100 percent (50 percent is the default). You can also set it to only start a scheduled scan when the computer is not in use. Out of the four programs I reviewed, avast! Free Antivirus 6 had the lowest resource consumption. COMODO Internet Security 5.5 was close in regards to the memory usage, but had the most sporadic and highest CPU usage. AVG Anti-Virus Free 2012 and Microsoft Security Essentials (MSE) are in a fairly close tie between the worst in consumption. AVG had a lower idle memory usage, but a higher scanning usage than MSE.

When choosing an antivirus program you’ll also want to take other things, like features, into consideration rather than just the resource consumption. COMODO and avast provide the most features, with COMODO offering slightly more due to the integrated firewall. AVG and MSE offer about the same amount of basic protection, but AVG gives you more customization options. Also keep in mind, if your computer is for business use you’re limited to using either Comodo Internet Security Microsoft Security Essentials.

Eric Geier is the founder of NoWiresSecurity, which helps businesses easily protect their Wi-Fi networks with the Enterprise mode of WPA/WPA2 security. He is also a freelance tech writer. Become a Twitter follower or use the RSS feed to keep up with his writings.