How to Secure Edge Computing

The notion of edge computing is a relatively nascent one in modern IT. While end user, data center and cloud computing are well understood, Edge computing is still struggling to define itself – and come to terms with some significant security challenges.

At the OpenStack Summit in Vancouver on May 23, a panel of experts debated the security considerations and challenges for edge computing. OpenStack is an open-source cloud platform technology project that is widely deployed by large carriers and enterprises. An emerging use-case for OpenStack is at the edge of the network, rather just in a data center.

Though there is some debate over precisely what edge computing means, in the OpenStack context, it’s about delivering and enabling the cloud at the edge of a larger network – making edge computing also a cloud security issue. The edge can still benefit from a data center, but it also can work independently and is a use case that is becoming increasingly attractive to operators as 5G mobile deployment efforts ramp up.

In contrast, edge of network deployments can be in exposed locations, such as cell towers and remote locations that aren’t as actively monitored and secured as a traditional data center. 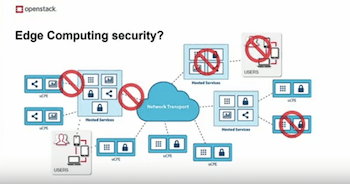 Rob Hirschfeld, founder and CEO of RackN, said that with edge computing, the importance of data encryption is magnified. Due to the fact that edge computing deployments might not have the same physical security as traditional cloud deployments, an attacker could steal a hard drive or potentially plug in a USB key. Hirschfeld also suggested that trusted platform computing elements all need to be turned on for edge computing.

“There is security embedded in infrastructure now that we’re not using now, in part because it’s not well automated,” Hirschfeld said.

With traditional cloud computing, most assets are within the same data center, or at least the same service provider. With edge computing, Glen McGowan, Dell EMC principal architect for NFV and cloud provider solutions, said traffic is flowing over untrusted public network segments. McGowan suggested that all edge computing traffic go over secure VPN tunnels that are as hardened as possible.

“Let’s start now to build a robust approach, because the bad guys are 10 steps ahead in a lot of cases,” McGowan said.

So what are the steps to secure edge computing?

“If we find a vulnerability that impacts thousands of edge sites and we don’t have a way to propagate the patch quickly, we’ve allowed that vulnerability to be easily exploited,” Hirschfeld said.